You just knew this had to happen eventually (sadly): 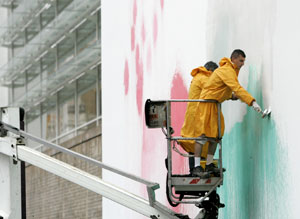 The Ara Pacis museum, a controversial modern museum in central Rome, has been hit by vandals with paint-filled balloons.

Vandals left a porcelain toilet and two packs of toilet paper next to the museum in the overnight attack, which appeared to be a comment on the design.

The paint on the white, block-like structure was red and green â€” the colours of the Italian flag.

There have been objections to the modern outline of the building by Richard Meier since the U.S. architect was hired to design it.

Right-wing Mayor Gianni Alemanno last year threatened to move the building which was a project of his predecessor. His criticism is that the modern structure doesn't fit with Rome's classical architecture.

The mayor has begun negotiations with the architect in an attempt to change the design. And he condemned the vandals.

Photo courtesy of the AP (Riccardo De Luca/Associated Press). If anyone has any photos they took email them to me and I will post them here.